Even after 69 years of Independence, India’s tribal communities have to fight tooth and nail for their basic rights.

2016 saw the completion of the 10th year of the Scheduled Tribes and Other Traditional Forest Dwellers (Recognition of Forest Rights) Act, 2006, commonly known as the Forest Rights Act (FRA). The right promises to safeguard the interests of the tribal communities and give them management and habitat rights over forestlands. 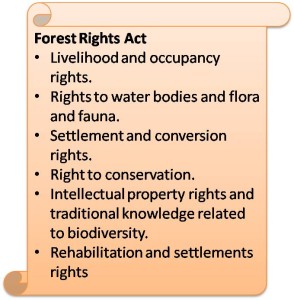 The FRA came under a lot of flak in the recent years for being a ‘misguided piece of legislation’, keeping in mind, its colossal systemic failures and criminalization of the victims while the perpetrators continued destruction of the adivasis’ home and livelihood, all in the name of development. Projects for dams, forest conservation and wildlife conservation like Project Tiger have become ways to evacuate tribals and to tag the remaining persistent ones as encroachers.

In the absence of the land patta proving their ownership, most tribal communities are helpless and the law is not coming to their aid. Gram Sabhas, which would have worked as shields, to protect the tribal land and voiced the interests of the community, often get excluded from the decision-making process itself, like when mining licenses are provided on tribal lands.

The present NDA government wants to further industrial interests but does not want to amend the FRA, which would invite a huge political furor. Hence it is looking for other ways to do away with the consent of the village communities. The FRA is a major jumble of one too many laws and thus impinges the applicability of the other laws like the Forest Conservation Act and the LARR, 2013, entangling the tribal communities in legalese.

Forest officials often view the tribal communities’ involvement as a dilution of their own powers over the forests. Also the Ministry of Tribal Affairs is understaffed and under-resourced in implementing the FRA. There is an implicit attitude that FRA hampers development by not allowing allocation of land for industrial purpose whereas the opposite is true. Lack of understanding on the part of forest officials, on how tribal communities function and conserve resources, adds to the present woes.

Community Forest Rights (CFR) have been more of a joke in India where it’s not about the allocation of forest rights in terms of forestland but the simple reallocation of the village’s agricultural and utility land in the name of the community. A futile activity at the best, such allocations take away a major chunk of the tribals’ forest management rights.

But as if to commemorate the 10th anniversary of the Act, the Baigas in Dindori district of Madhya Pradesh have gained the right to their habitat. This is for the first time habitat rights have been given under the FRA. Habitat rights go beyond the individual and community rights conferred under the Act and encompasses their whole culture and way of life. It is a holistic right to conserve the livelihood of the tribes in the face of a concretized draconian model of forced development.

The Baiga community is one of the 75 PVTGs- Particularly Vulnerable Tribal Groups and as per a new amendment in 2012, all PVTGs were eligible to receive habitat rights. The Baigas worked together with the district administration, forest activists who were concerned about the tiger reserves and mapped out the entire reserves so as to not intrude within the tiger occupied spaces.

Swati Sudhakaran is currently pursuing Masters in Public Policy at Mount Carmel College in collaboration with the Takshashila Institution, Bengaluru

Challenges for an Universal Health Coverage in India

A new global index to assess the development of countries in meeting their SDG goals has indicated that India ranks 143 among 188 countries in health index. Many Indians may be happy with this because we rank better than Pakistan and Bangladesh, but we are, in fact, placed below countries like Syria, Iraq and Ghana.

If the aim was to turn the healthcare into an export sector to advance medical tourism, we have succeeded with our 5 star hospitals and cost effective treatment to people.The medical tourism industry according to the Confederation of Indian Industries is at $3 billion as of October 2015 and is expected to touch $7-8 billion by the end of 2020.

But Universal Health Coverage (UHC) still eludes Indians. The BJP, in its manifesto, had promised health assurance to all Indians and vowed to reduce out-of-pocket expenditure on healthcare. Presently, the government spends on average Rs 4,895 per year on every person covered under CGHS (who are a few million), while the average public spending for the health of all Indians (who are some 1,250 million) is about a fifth of that. Policymakers need to get out of the scandalous selective choosing of whom to cover and hence should actively push for a UHC.

Governments of UK and Thailand have successfully implemented UHC with both its underlying characteristics- good quality healthcare and of not exposing citizens to financial strains during treatment.

WHO recommendation of one doctor for one thousand people, we have one doctor for 1450 people. With this ratio, nearly a quarter of the posts are lying vacant and the situation is all the more severe in rural areas which have a deficit of six lakh doctors. The doctor population ratio in rural India is about 1:3200. The situation here, is worse than Vietnam and African countries like Algeria.

India is among the 194 countries that are aiming to attain Universal Health Coverage (UHC) by 2030 under the commitment to attain Sustainable Development Goals (SDGs).

The state of healthcare has deteriorated to the extent that one serious illness in a middle class family can push it below the poverty line. Poverty caused by medical expenditure is increasing significantly in both urban and rural India. Recently, there was a news report that in Mumbai, an individual may have to spend two years of his family’s annual income for treating a disease like TB.

The country at present suffers from the triple burden of disease — the unfinished agenda of infectious diseases; the challenge of noncommunicable diseases (NCDs), linked with lifestyle changes; and emergence of new pathogens causing epidemics and pandemics.

Nearly 60 per cent of the total health expenditure is incurred by patients directly for which there is no provision for reimbursement or insurance. It shows that it is imperative for India to have a well-designed health insurance scheme which will act as a safety net for these people. The formulation of relevant healthcare policies with effective tools for implementation and monitoring are the need of the hour. We are losing six per cent of our GDP to preventable illness and premature deaths.

WHO has designed a Universal Health Coverage Profile for member countries entailing four parameters of assessment. 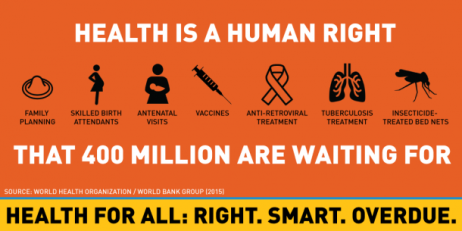 The first parameter is reproductive, maternal, newborn and child health. According to data from the Health Ministry, India loses over 44,000 women to pregnancy-related complications every year, which means one woman dies every 12 minutes for want of care.

The third factor is the burden of non-communicable diseases. About 30 per cent Indians have high blood pressure. Lifestyle diseases are cropping up faster than usual, spiking the numbers.

The fourth component of the assessment includes basic hospital access, density of health workers, access to essential medicines, and compliance with international health regulations. India has only six hospital beds per lakh and close to two surgeons per lakh population.

Data or rather accurate data is a source of empowerment. On 12th December, i.e. Universal Health Coverage day as commemorated by WHO, a data portal system was launched to keep a track of the progress towards UHC and also to indicate the points at which countries needed improvement.

It is important for policymakers to address how the spending needs to be done on universal healthcare rather than how much.

Swati Sudhakaran is currently pursuing Masters in Public Policy in Mount Carmel College in collaboration with the Takshashila Institution.